At Praxair, we deliver gas and liquid helium (He) in a variety of purities up to 99.9999%. Explore the chart below to view the SDSs for our pure helium products and a few of our popular welding mixtures. If you don’t find what you’re looking for, contact us and we’ll manufacture a binary or multi-component helium mixture to meet your unique specifications.

At Praxair, we develop the right grades for the right applications. Give us a call and we’ll help you get the most out of your liquid helium and helium gas.

USES OF HELIUM GAS AND LIQUID HELIUM BY INDUSTRY

From manufacturing to flight, helium is widely utilized throughout the aerospace and aircraft industry. In space flight operations, helium is used to purge hydrogen systems and works as a pressurizing agent for ground and flight fluid systems. It is also a source of lift in weather and other surveillance balloons.

Helium is used to test critical automotive parts such as radiator heat exchangers, air conditioning components, fuel tanks and torque converters to ensure they meet quality specifications. It is also used in combination with argon as a source of inflation in a growing number of airbags.

In combination with oxygen, helium is used in diving to help eliminate nitrogen narcosis, reduce breathing resistance at depth, and shorten decompression stops. Known as heliox, the mixture allows divers to reach greater depths for longer periods of time. The deeper the dive, the higher the concentration of helium, allowing divers to explore more and weld longer.

Helium plays a significant role in the manufacturing of semiconductors, LCD panels, and fiber optic wire. It cools parts and components quickly to enhance throughput, controls the rate of heat transfer to improve productivity and reduce defects, and functions as a carrier gas in the production process.

Helium is used to achieve cryogenic temperatures of -451 degrees required for superconducting magnets in MRIs and NMRs, allowing the capture of high-resolution images of internal organs and tissues.

Helium's inert properties at arc temperatures make it an ideal gas for welding materials with high heat conductivity such as aluminum, stainless steel, copper and magnesium alloys. Helium is also used in heat treating processes such as gas quenching and in furnace atmospheres to produce parts with higher tolerance and improved quality.

Explore other industries that use helium.

We offer gaseous helium in a large range of high-pressure cylinders, and liquid helium in wide variety of dewars. Specialized packages are also available and designed for specific industries and applications.

Our bulk liquid and gas delivery systems allow us to provide a full range of purities to meet your helium supply needs. We also supply liquid helium in specially designed bulk liquid ISO framed containers with volumes of up to 15,000 gallons.

Not sure what’s right for you?

At Praxair, our scale and reach lets us supply any gas, for any application, almost anywhere in the world — safely, reliably and cost-effectively. Give us a call and we can help you determine the best supply option for your operations. 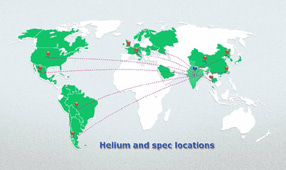